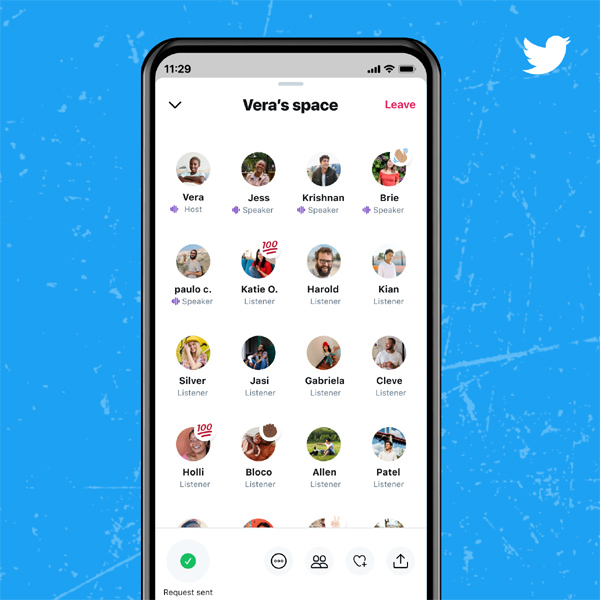 Last year Twitter introduced Spaces: live audio conversations on the Twitter. Since then, the tech giant has been building and testing with a limited group and have found that hearing people’s voices bring conversations on Twitter to life in a completely new way.

“Since we’ve been building this, the ability to create a Space has become available to millions of people, and we’ve continued to make improvements based on your feedback. Today, we’re bringing the ability to host a Space to all accounts with 600 or more followers on Twitter. Based on what we’ve learned so far, these accounts are likely to have a good experience hosting live conversations because of their existing audience. Before bringing the ability to create a Space to everyone, we’re focused on learning more, making it easier to discover Spaces, and helping people enjoy them with a great audience”.

From Tweeting to talking, reading to listening, Spaces encourages and unlocks real, open conversations on Twitter with the authenticity and nuance, depth and power only the human voice can bring. Spaces are for small and intimate conversations with just a few others, or for big discussions about what’s unfolding right now with thousands of listeners. From connecting to your favorite musician to a post show about the game or a recap of news that just dropped, dig into the topics and conversations you care about with people you know and people you want to know.

On Twitter for iOS and Android, when someone you follow starts or speaks in a Space, it’ll appear at the top of your timeline as a purple bubble for as long as it’s live. When you join a Space as a listener, you can react to what you hear with emojis, check out any pinned Tweets, follow along with captions, Tweet or DM the Space, or request to speak.

When you join a Space as a speaker, in addition to talking, you can pin Tweets to the Space, turn on captions so everyone can follow along with what you’re saying, and Tweet the Space so your followers can join.

When you create a Space, you’re in control – who’s speaking, the topics, and the vibe. Invite people to join by Tweeting or DM’ing them to jump in and then invite them to speak directly from your Space. From there, talk about whatever is happening in your world.

It’s important to that people feel safe hosting and participating in Spaces conversations – that’s why safety controls are available to hosts and speakers. For example, as a host, you can mute speakers and take away their mic, or remove them from the Space completely. Recently, the ability for Hosts to mute all speakers at the same time and a new management page for easier hosting.

You can learn more about how Spaces work here.